Time expanded for me one morning last week while waiting for a friend whose arrival time was uncertain. Having set aside time for our meeting, I pondered what to do until she arrived. This was the very first perfect winter’s day in Amherst, sunny, with fallen snow creating winter’s intense white brightness. The beauty outdoors inspired me to photograph the amaryllis that had just flowered in my living room. Grabbing the camera, I looked at the flowers, bold in their size and color, delicate in their detail. Each petal was a fiery red near its center, becoming white toward its tip. Slender red lines emerged from center to periphery, as if drawn on the petals. A similar red line etched the edge of each petal. These flowers were clearly a work of art, though their beauty would be very short-lived. The photos would provide a record.

How best to photograph them? Placing the plant against different backgrounds, I quickly realized it needed the simplest background—a wall. The differently colored walls and play of sunlight in the hallway and living room provided many options.

I placed the plant on a table in front of a rich golden wall, taking pains to include only the plant in the composition, not the stone sculpture beside it. The stone sculpture was a dancing girl from Zimbabwe that I had lovingly carried back on the plane many years ago. 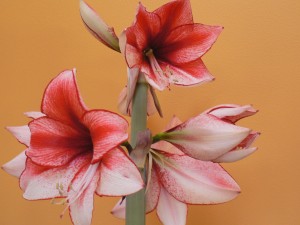 After several carefully-composed plant shots I noticed that the dancing girl was enthusiastically gesturing toward the plant. I had been trying to keep her out of the photo when, in fact, her grace and beauty were part of the scene. Unlike the ephemeral flowers, her stone beauty could last many years. I photographed them together. 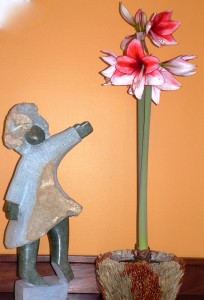 After almost an hour I realized that my friend had not appeared, that we would not meet that day. But the stillness of the time I allowed for her arrival created a doorway into spaciousness. Entering it, I was able to focus with clarity on the exquisite beauty of the amaryllis and then, noticing the dancer, to take the larger view. Fully engaged in seeing, appreciating and photographing, I had the delicious sensation of floating, almost magically, through a space in which time was suspended. There was as much time as I needed, without my knowing, or needing to know, how much.

In yoga we learn about the madhya, a Sanskrit word that means gap, pause, the place of stillness between two movements. It is the time between the ending of one activity and the beginning of another, time that can be as brief as the still moment between breathing in and breathing out. Yet, if we notice it, it provides a doorway into an inner spaciousness, a place where there is always enough time. The photos I took that morning to remember the soon-vanishing beauty of the amaryllis now remind me also of the madhya, the always-available gateway to time and space.

This entry was posted in Beauty, Meditation, Tantra yoga philosophy.. Bookmark the permalink.