So I Climbed Bald Mountain: What’s the Big Deal?

Bald Mountain has a prominent presence in Oquossoc, Maine, where I spend summers. Its trailhead is just ½ mile away, and, when I’m on the water looking east, there it is, just behind our camp. I took this photo of Bald from my kayak on Mooselookmeguntic Lake a few weeks ago. 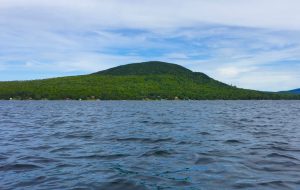 It’s a popular hike up Bald. On nice weekend days, cars spill out from the trailhead parking lot to the road. Groups small and large, often with dogs and young children, climb the 1.3 miles in 1 to 1.5 hours. The climb is ‘moderate,’ and the views from the lookout tower at the summit more than worth the effort. There is a picnic table at the top, and hikers often bring food.

For the fun of it, I have climbed Bald Mountain at least once each of my thirteen summers in Maine. Some years I have climbed alone and, more frequently, with friends or family. Until late this summer, climbing Bald seemed optional—a nice thing to do, but not something I had to do.

Because this summer was busy, it was mid-August before I started thinking about making this climb. By then, the only available time was during the last week in Maine—that Thursday, September 1, possibly Friday. With rain Wednesday evening, Thursday was out. The trail would be too wet.

Wednesday night I had a bad dream. I attempted to climb Bald Mountain and couldn’t do it. It was just too challenging for me. The dream was disorienting, disconcerting. It haunted me. True, in recent years, hiking with people considerably younger, I was slower than almost everyone almost all of the time. Still, making the climb wasn’t an issue. Physical yoga practice kept me in good shape, and I enjoyed the challenge. Last summer, I climbed it twice. So what’s the big deal?

I awoke on Friday with no ambivalence or fear about making the climb. I would, I could and I had to make that climb. Why I felt compelled I did not know.

A long-term yogi, I do know my body well. My hips would very likely complain after the hike. As eager as I was to get to the trail that afternoon, some asana practice was needed. After opening hips, stretching hamstrings and calf muscles and making a deep connection with myself, I was ready. Glad to be hiking alone, I would slow down no one but myself. 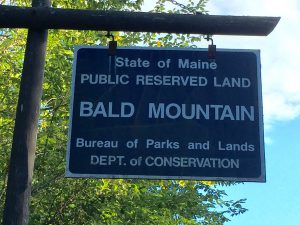 The hike up Bald is in three stages. At first, the trail is fairly level, with rocks and roots far enough apart to make walking easy. Then the trail becomes more steep, with snake-like roots, more rocks, much uneven terrain and an occasional tree across the path. I look down a lot, taking careful steps. The trail is quite dark. 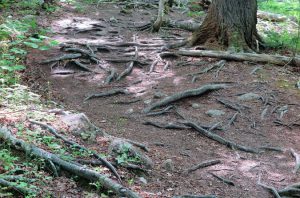 At a certain point, the trail becomes much more steep, with mostly big rocks that require lots of scrambling. 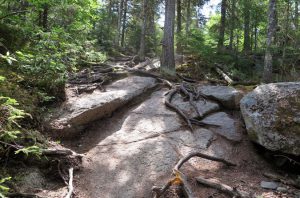 I have seen dogs and young children scramble easily here. Not me. I stop, look down and figure it out—this side, no that. There’s a branch I can hold onto. Too wet on that side. 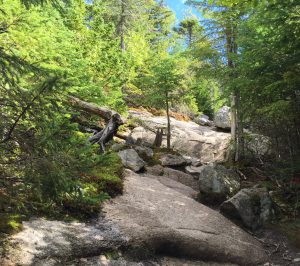 Even as the climb is steeper, the light is brighter here, and, through the trees, I begin to see water below.

As I climb, I pass three parties coming down, but none climbing up. Finally, coming over the last big rock, I emerge out of the trees into the light at the summit. In the past, there are always people here. This time, I am alone. I climb the tower and take in the 360 degree views. 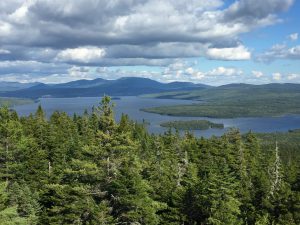 The expansive lakes, land and mountains are glorious and, in a way, familiar. I know them, at least a little. I can name the lakes and some roads. I see from up here places I have seen or visited by boat, kayak, car, bike or foot. Looking down in awe, I understand where I am in a way that feels intensely personal. From here I can say goodbye to this majestic natural beauty, goodbye for this summer. And so I do.

I head back down the trail, still moving slowly and strategically. It is just as hard to come down as to go up, though the muscles are working differently. I can feel how hard they’re working to hold me back from moving too fast. It’s easier to fall in this direction, and the trail is wet in places. I slip once, unharmed. Continuing down, I am surprised to pass a couple of parties hiking up. It’s now late afternoon.

Near the end of the hike, I encounter a gray-haired woman using two walking poles, accompanied by two dogs and a young woman. The older woman looks rather frail, her body trembling occasionally. We stop and talk. I notice one of the dogs, Daisy, a friendly golden retriever, struggling over the rocks and roots on this ‘easy’ part of the trail. I comment on her struggles, and the woman tells me about Daisy’s congenital hip dysplasia, which, not surprisingly, makes the hike very difficult. “But when she needs to rest, she just lies down for a while.”

The woman makes clear that they do not plan to go all the way to the summit. As we go our opposite ways, she tells me how much she loves this hike, especially at this time of year, September, when the air is clear. She hikes on happily, with Daisy close by. I admire her, her love of this trail and the determination and grace with which she hikes it.

I return to camp, very pleased that I made the climb. Post climb I have no physical discomfort. Thank you, yoga. What takes time and effort is figuring out why I had to do it, why it became so important.

Did I have to climb Bald to ‘prove’ to myself that, at 73, I was physically up to it? Not really. I knew I was strong, flexible, balanced, agile and careful enough to do it. As mountains go, Bald is quite modest. The dream was not about whether, this summer, I could do this hike. The dream was about something deeper–that I cannot know for how much longer I’ll be blessed with the opportunity, health or breath to do this climb. I didn’t know until I got to the summit that getting there gave me a powerfully moving way to say goodbye to this place that I love, to acknowledge that I am getting older and to feel grateful for having been here again for another summer. Only now is it clear why I had to climb Bald this September—to say goodbye, with gratitude.

This entry was posted in Aging, Connecting with nature, Gratitude, Hiking, Maine lakes. Bookmark the permalink.

4 Responses to So I Climbed Bald Mountain: What’s the Big Deal?