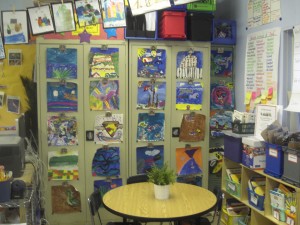 'My' table in Gary's classroom

Little did I know how much yoga I could learn from second graders, but as I thought about my day with my friend Gary Proulx’s class at PS 321 in Brooklyn, an enduring yoga theme–stability and freedom—was clarified. In yoga, we create a strong and stable structure for each pose as we engage our muscles and align our bodies carefully. From there, we stretch as we expand fully, freely, and safely into the full pose. Observing students in a yoga class, I see the beauty, shri,  in each pose, and in the variety of its expression. Observing Gary’s 2nd graders, I saw enthusiastic children eagerly engaged in learning, questioning, observing and offering their ideas. As I looked more deeply, I became aware of the underlying stability and structure that supported their freedom to learn, grow, express and create.

Gary’s room was completely filled with colorful things to see and read. Some student art was even displayed on clotheslines hung across the ceiling. There was a list of ‘jobs’ for students to do, and a daily schedule for students to read. There was too much for me to take in quickly, but I began to see some order in the crowded space. 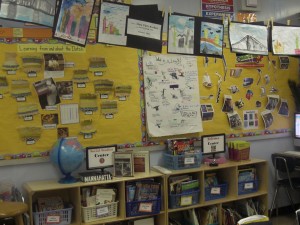 When the beautiful, diverse group of children arrived, it was clear that they had it down….totally! They knew where things should go, where to sit, and how to find out what happened next. As they arrived, students hung up their things and sat at three long tables. Removable cloth pockets that fit onto the backs of each chair held their work. There was a place for everything.

First period, reading. Singly and in pairs, students quickly found books and began to read. Four girls came to my table eager to read with me. I suggested each read two pages in turn. While they did not all read at the same level, they took that in stride and helped each other. They monitored the number of pages each read, insisting that they each have an equal chance. They chose one of their favorite books and read it with playful glee. They cared about fairness, and loved to read.

For ‘choice time,’ students each chose something to do. A boy asked me to play chess and I confessed, with some embarrassment, that I didn’t know how. Unfazed, he suggested a solar system puzzle. We worked on it together—he many times faster than I, using his knowledge of the planets to assemble it. When Gary announced it was time to clean up, seeing we were almost done and thinking the boy would feel better with the puzzle complete, I kept working. The boy reminded me we had to clean up. Pleased with what we had accomplished, he understood and respected the routine and rules.

Reflecting later on what I had observed, I saw students fully engaged, curious and thoughtful. Knowing the boundaries, what was going to happen next, what was expected of them, they could dive fully into each activity. They were lively and sometimes funny, occasionally echoing the teacher’s humor back to him. No child looked bored or acted disrespectfully. The stability provided by the structure of space, schedule, activities, clear values and a very skilled and caring teacher enabled the children to be productive and expressive, to grow, learn and to be themselves.

At the end of the day I did a very brief yoga practice with the children in a space much too small.  They loved it. In tree pose, I invited them to say what tree they were. While in the pose, many raised their hands and, when called on, named a different tree—‘apple’, ‘coffee’, ‘orange’, ‘banana’……So many beautiful trees! I thanked them and realized only later how much they had taught me about yoga.