Whenever we drive up to Maine before summer, I feel as if I’m going back in time, back several weeks. So for this trip late in April, with Amherst already green, colorful with early bulbs and azalea, and leaves about to burst forth, I knew these signs of spring would gradually disappear the farther north we got, and as we climbed into the mountains. And they did. Green turned to brown, and nothing had yet blossomed. There were still a few patches of snow, but mostly wet where snow had been.

On this, the first trip I had ever made to Maine before Memorial Day, I saw ice on the lake for the very first time.  Mooselookmeguntic, (Mooselook for short) the lake in front of the house, was strikingly beautiful—much of the lake white with ice, and, near shore, blue where the ice had melted, with interesting ice formations throughout. The ice moved, melted and changed shape each day. Something intriguing was happening. I kept glancing out at the lake, noticing changes, even as I had to focus on a big indoor project. 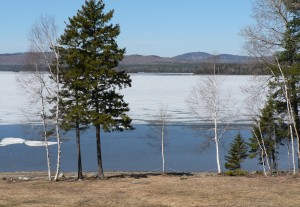 Taking a break one afternoon, I sat on the dock and was enveloped by the unusual stillness. With little moving water, no leaves on the trees and almost no wind, only the occasional calls of birds punctured the silence. When I heard a loon from far across the lake, I was comforted by its familiar call on the lake that now seemed strange. These moments on the dock changed my focus, gave me energy and piqued my curiosity about what was happening on the lake. Even as I returned to my indoor project, my mind was drawn to my experience beside the lake.

I couldn’t resist photographing the lake the next day, though I felt I didn’t have the time. The camera drew me to observe more carefully. In some places the ice looked gray or brown, and there were interesting designs on the surface where the ice seemed very thin. I realized that huge invisible changes were going on beneath the surface, changes that would result soon in the clear, ever-moving, ever-changing lake I knew. How and when would this happen? 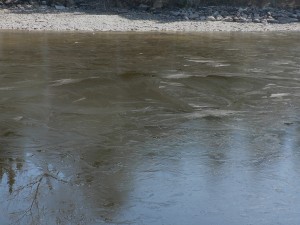 Ice out is a yearly phenomenon I had heard of, but knew little about. One day—and the day differs from year to year—the ice is declared out. On some years, a neighbor reported, ice out occurs on a windy day and there is a noisy, ground-shaking cracking, with ice floes crashing into docks and other structures, doing damage. It can be frightening and dangerous. But other years the ice breaks up and melts without much sound or movement.

So what exactly is ice out? Who gets to decide that it has happened? Why is it so important? Once back in Amherst, I searched online, emailed friends who witnessed it yearly, read research reports about ice-out dates as indicators of climate change and how ice forms and melts on lakes. I noted the state of Maine’s official definition of ice out, and perused Facebook conversations about how soon it was likely to happen on the local lakes, Mooselook and Rangeley.

It wasn’t easy to find the answers to my simple questions, because ‘everyone knows’ these things. It was clear to me, however, that my effort would continue until I had gained some understanding. This determination to find out was familiar to me, but I was a bit surprised by how important this pursuit became and by how much energy I devoted to it.

Now I do know more. For both local lakes, Rangeley and Mooselook, ice out has occurred when it is deemed possible to navigate from one specified location to another—much of the length of the lake. The local game warden makes the determination. Dates vary from year to year, and ice out usually occurs at different days on these lakes. This year the date was May 2 for both lakes.

Ice out matters to local residents. There are contests and wagers about the date of ice out each year. Once the ice is out, fishers can launch their boats onto the lakes. And ice out means that spring has come, really. Those of us who do not live near a northern lake must make do with the vernal equinox and with much less dramatic ways to affirm spring.

Coincidentally, at the very same time I was researching ice out I began to read Sally Kempton’s new and wonderful book, Awakening Shakti, The Tranformative Power of Goddesses of Yoga. Having read the introduction, I turned to the ‘Which goddesses are you’ appendix to figure out which goddesses I shared the most with. On this initial look, though I found I had something in common with all eleven goddesses, Saraswati stood out. I read more about her. She is about words, speech, wisdom, solving intellectual and artistic problems, discovering connections, having insight, knowledge. There is much more, of course. Coincidentally, she is also thought of as the goddess of flow, her name meaning ‘the flowing one.’ She is often pictured sitting next to a flowing stream. 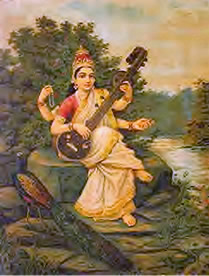 I believe she had something to do with my drive to probe the meaning of ice out. When I took a break from my work indoors, went outside and began to observe Mooselook in its icy beauty, a flow of my own thinking, questioning and wondering began. That flow was fueled by a power that felt both compelling and natural to me as I attempted to learn, understand and make connections.

Yoga is a journey of self-discovery. Recognizing that the Shakti, the power, of this goddess is part of me expands my understanding of myself. And perhaps Saraswati, like me, is smiling at this connection of her power with the flow of my understanding of ice out.

8 Responses to Saraswati Comes to Mooselook