As I watched my Aunt Pauline gear up for her 90th birthday skydive, I looked at her thin, frail body and wondered whether she would make it back in one piece, or at all. Awed and anxious, I marveled at her willingness to do something so risky, something I, many years her junior, would definitely not attempt. After she landed, she said, smiling, it was ‘awesome.’

Pauline at 90 ready for skydive

Feisty, direct and funny, Pauline had a sharp mind, always curious about ideas, people, and events. She read widely and avidly, and enjoyed music, film and theater. Even as she aged she was fiercely independent. When my partner and I visited her last year, she insisted on picking us up at the airport.  She was 92 at the time, and just 3 weeks past some serious surgery. Despite numerous phone calls during which I tried to dissuade her, she insisted. And I realized that, if Pauline had her mind made up, that was that. So she picked us up and drove to her house on the complex of busy freeways in San Diego with great skill and confidence. I could not have done as well.

Pauline’s independence was matched by her love for family. She had one child, my cousin Joni, and over the years became a kind of mother to me, my sister and my many first cousins. Her ‘lived’ family was very large—many of us staying in touch and visiting regularly. She was happiest when the ‘extra’ bedroom in her home was in use. And it very often was.

As I think of what was so very special about Pauline, I think about the Hindu goddess Kali. She’s the one who is generally pictured as wild-looking—wild hair, skulls around her neck, often wielding a sword and with her tongue sticking out. Let me make it clear that Pauline never looked Kali-like. She was always well coiffed, neatly dressed, nails beautifully manicured. In fact, I’m certain that if Pauline had ever met Kali she would have suggested, nicely, of course, that she do something about the hair. 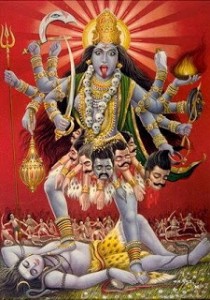 But Kali, in addition to being fierce and tough, symbolizes a kind of liberation. She encourages us to embrace all parts of ourselves and not to be limited by narrow assumptions of who we are. As Sally Kempton says in one of my favorite Yoga Journal articles, How to Be Fierce:

…In pointing you toward those parts of yourself that you have rejected, feared, or ignored, she inspires you to transform your identity over and over again, letting go of the old rigid ideas of who you are, stretching your emotional range, your mind, and life itself in delicious and liberating ways.

By both her example and her words, Pauline inspired me and many others to get beyond our fears so that we could lead our lives in delicious and liberating ways. On this Thanksgiving, I am especially grateful for the blessing of my Aunt Pauline, such an amazing guide to an engaged life, lived fiercely and lovingly.

[Pauline passed away after a brief illness on November 13, 2012. A video of her 90th birthday skydive, produced for Belgian television, is here.]